Posted on November 20, 2011 by briansbestbooks 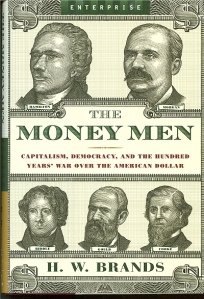 The first thing you need to know about Prof. H.W. Brands’ The Money Men is that the author failed. In the prologue of this book, Brands connects the individual exploits of five great American financiers (Alexander Hamilton, Nicholas Biddle, Jay Cooke, Jay Gould, and J.P. Morgan) to the larger issue of how the struggle between popular democracy and capitalism affected the evolution of the money in the United States from its founding to the First World War.

He then spends nearly 200 pages walking the reader through the respective careers of these men and — unsuccessfully — attempts to tie them together to explain how we ended up with the greenback and Federal Reserve. The problem is that despite his efforts to shape these separate stories into a cohesive, progressive narrative to make his point, they come off as a string of pearls that are, more often than not, connected tenuously to each other and his larger point.

The second thing you should know is that even though Brands’ overarching argument is ultimately unpersuasive, he did write a very readable and entertaining book, for non-fiction history, anyway. If that sounds like a backhanded compliment, well, that’s pretty much what it is. But that aside, I think it’s still a worthwhile read for both the armchair scholar and the hardcore history buff.

The people he profiles are interesting, to be sure: Even though he’s probably the least-essential figure to Brands’ thesis, I especially enjoyed the story of Cooke, the bond-salesman-in-chief for the Union during the Civil War (or War of Northern Aggression for you readers south of the Ohio and Potomac Rivers). For instance, here’s a totally irrelevant but still fascinating account of Cooke’s proficiency with counting bank notes provided by one of his colleagues and included in the book:

“With lightning rapidity, the notes passed through his delicate fingers. … There was no hesitancy, no pause, apparently no thought or mental effort. It was as a smoothly flowing stream of noiseless water. … There was no counting over; one count was sufficient. … There was no fluster, no perturbation, no thought apparently of a mistake being possible. As he counted he could talk also. He both asked and answered questions, briefly of course, but the like I had never seen and it astonished me.”

Some dudes, it seems, were just born to be rich.

Anyway, the one thing that comes across in all of these brief bios is that none of these men did things halfheartedly. They all threw themselves wholly and shamelessly into whatever they did, whether it was Hamilton the social climber who managed to use even the most inconsequential political appointments to push his financial schemes forward, or Gould the stockjobber who had to flee New York’s financial district for his life to avoid ruined speculators after he cornered the gold market.

However, the strongest personality described in the book isn’t any of Brands’ money men, but rather President Andrew Jackson, who fought to close Biddle’s Second Bank of the United States. Jackson believed this institution was unconstitutional and a threat to freedom, and took steps — subtly at first, but then much more forcefully — to shut it down. Here’s his rationale for doing so, which is worth citing in full from Brands’ book:

“Distinctions in society will always exist under every just government. Equality of talents, of education, or of wealth can not be produced by human institutions. … But when the laws undertake to add to these natural and just advantages artificial distinctions, to grant title, gratuities, and exclusive privileges, to make the rich richer and the potent more powerful, the humble members of society — the farmers, mechanics, and laborers — who have neither the time nor the means of securing like favors to themselves, have a right to complain of the injustice of their Government. There are no necessary evils in government. Its evils exist only in its abuses. If it would confine itself to equal protection and, as Heaven does its rains, shower its favors alike on the high and the low, the rich and the poor, it would be an unqualified blessing.”

That eloquence and sophistication seem especially incredible in light of the fact that Jackson had very little formal education. The argument he made is one that people in this country used to elementally grasp, but lost at some point in our history. It’s also, ultimately, an ideal that the more authentic, informed elements of both the Tea Party and Occupy movements are striving to recover. If these groups could put aside the decades-old culture war, attempt to form alliances across traditional divides, and educate Americans on the injustices perpetrated by the political and business elites of their nation, then they might — might — manage to effect real, meaningful change.

Oh, who am I kidding? Divide et impera!